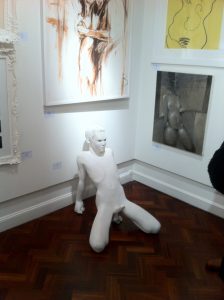 I had two pieces in this show – the one above, Orc 3, and another, Orc 4, placed in the window.

We had hoped for some reaction from the passing public, but if they were shocked they didn’t say so. The show was opened by Edward Lucie-Smith who was kind enough to comment on the first piece in this series saying “very striking…startlingly realist, with…an hallucinatory quality”.

These pieces all have the generic name ORC; the reference is to William Blake rather than to J.R.R.Tolkien.

Our lives are increasingly circumscribed by legislation and new taboos. We live in a state of overt sexuality: apparently anything goes. But this so-called liberation exists within very strict limitations. Sex is now ‘out in the open’, but what is permissible is governed by a collective sense of what constitutes ‘normality’. Anything outside that, rather than being ‘brushed under the carpet’, as it was for Blake when much sexuality was repressed, is now actively persecuted, sometimes by mob violence, by an hysteria created almost entirely by a prurient, prudish and thoroughly hypocritical popular press. Indeed, it would not be too much to say that such collective ‘normality’ as we have is itself a product of that same popular press: a tabloid morality.

To be outside ‘normal’ is now, perhaps, a more perilous situation than it has ever been. And yet this view of normality is very recent, normality being whatever society deems it to be. Normality for many cultures was, is, and will be, very different.

For Tolkien, Orc was the goblin of war and modernity threatening him in his ivory tower. For Blake he was the spirit of revolution subverting the sterility of his times. Orc, for me, represents all the sexual potential that is repressed by the culture in which I find myself. It is as dangerous as it is enticing.